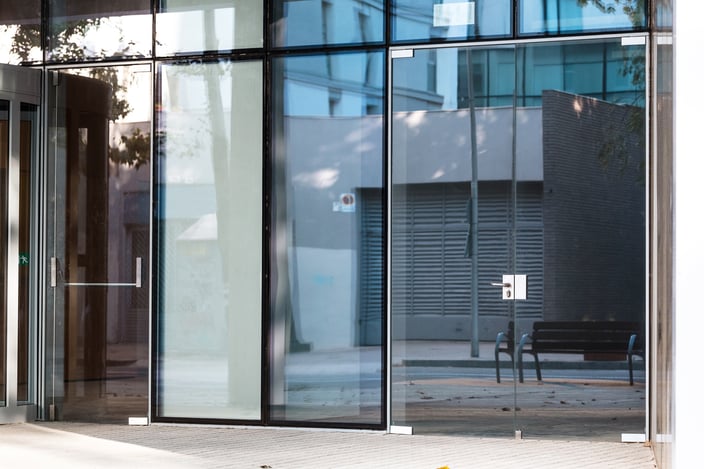 Be it flying debris, an accidental bump, or even an irate customer or angry mob, sometimes glass integrity is tested by tough impacts.

That’s where laminated glass comes in.

As one of the go-to safety glasses on the market, laminated glass protects people and property from unexpected damage and improves security.

What Is Laminated Glass?

Laminated panes are created by bonding a clear, vinyl interlayer between at least two plies of glass. Its composition offers increased integrity against heavy or direct blows. With a special polycarbonate layer, this glass can even be bulletproof.

Should this type of glass break, it doesn’t shatter and fall out of place. Thanks to the middle layer, broken glass pieces remain within the pane. This drastically reduces the chance of injury from jagged shards.

Laminated glass can be fabricated to fit any space or feature any color your project demands.

Because of its security benefits and resistance to impacts, laminated glass is a perfect material for projects where public safety and property protection are paramount. Common applications for laminated safety glass include:

From doors and sidelights to glass walls, laminated panes can withstand accidental bumps or deliberate breakages by those with less than good intentions.

Put simply, laminated glass is harder to break completely through and shatter than traditional, single-paned glass.

Just like entryways, windows are not immune to breakages. With laminated glass windows, whether an insulated glass unit, a display window, or an entire building exterior -- durability isn’t a concern.

This is particularly important in areas where hurricanes or tornadoes are a threat. Laminated glass offers an additional shield from flying debris. In fact, building codes in many hurricane-prone areas -- such as coastal communities -- require laminated glass with a stronger middle layer to prevent breakages.

Because of its strength and safety features, laminated glass is becoming more popular in railing applications. What’s more, a laminated glass railing is an eye-catching accent to a space.

Not every customer is a happy customer -- sometimes things can get out of hand. For those instances, laminated glass is an ideal material to keep those disagreeing separated from the customer service rep.

Laminated glass can withstand direct impacts. Should it break, this glass limits the chance of injury from broken shards to those on both sides.

Like regulations for hurricanes, many municipalities require laminated glass for places where public safety is a concern, such as courthouses.

Glass partitions can add an element of modernity and sophistication to a room. They’re popular in high-traffic public spaces, such as hotel lobbies or airports. With an ultra-clear, vinyl middle layer, laminated glass offers almost the same clarity as low-iron glass. Plus, it easily stands up to the bumps and dings from passersby that regularly happen.

While tempered and low-iron glass are most frequently used for custom shower enclosures, laminated glass is becoming a popular option in Europe -- primarily because of its safety features. The trend is likely headed to America.

As one of the toughest and safest glasses available, laminated panes ensure public safety and protection no matter where it’s installed. Whether it’s required by building codes or intended to add to a space’s aesthetics, laminated material is indeed a versatile and durable choice for any project.

Is laminated glass a good fit for your project?

We’d be happy to discuss it with you. Use the button below, and we’ll be in touch soon.

(Editor's note: This article was originally published in September 2020 and was recently updated).